↓
A BRIEF HISTORY OF THE TORQUAY BOWLING CLUB
An

ELEPHANT from a visiting Circus was the direct cause of the Club having to leave its first home on the Town’s Recreation Ground and it happened one night in the 1890’s. The Elephant broke out of its housing in a nearby field, trampled through a stream onto the bowling green, flooded and completely devastated the green.
The Club had originally been founded in 1889 by a group of sixteen ”Gentlemen of the Town”. These gentlemen were not however deterred by the elephant episode. At a meeting held in 1899 they reformed the Club to play on “a fairly hard piece of ground“ in the Princess Gardens, adjacent to the Torquay Pier. They fixed the annual subscription at 5 shillings a year.
In 1900 the Devon Challenge Cup was competed for between all the clubs in the County and was won outright by Torquay B.C. in 1903. The Devon County Bowling Association was formed in 1908. The County put up the Devon Bowling Shield for competition by the 15 affiliated clubs and the Shield was won outright by the Club in 1920
Some years just before the outbreak of the First World War, club members negotiated with the Cary Park Trust to lease some land at Belgrave Road. The Torquay Bowling Club Limited (see Limited Company page)was formed with a capital of 700 @ £1 shares purchased by the members and a lease for forty-six years was taken up at a rent of £10 per annum. The money thus raised by the Company was invested in the creation of a bowling green at Belgrave Road. A further £300 was raised by debentures to build a pavilion. The green was opened by Colonel Jack Cary and Mrs Cary on Saturday May 18th 1912. Mrs Cary bowled the first jack and the Colonel bowled the first wood which apparently was a “toucher”. The green at Belgrave Road has remained the home of the Club to this day. The centenary of the opening of the green was celebrated on Saturday, May 19th 2012 by a visit from the Bowls Devon President, Barry Corps and his team. 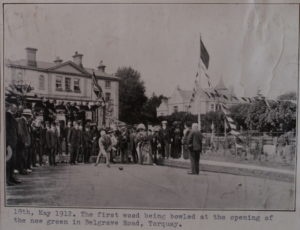 A Ladies Bowling Section was formed in 1931 to play on the top green, which had previously seen service as a Lawn Tennis court and as a Croquet green.
In November 1932, the Torquay Bowling Club Limited purchased the Freehold title to the land from the Cary Trust for the sum of £1000. In 1957 the Club motto “Felicitas Ludere Est” meaning “Playing is Joy” was adopted.
In the long record of great Torquay players perhaps the most outstanding player was Fred Horn who won the Devon Singles Championship five times, the Pairs three times, the National Pairs once and was a very successful England Skip for many years, In 1954 Fred Horne Captained his country. His wife, Mrs Elsie Horn was also a very fine player and was an England International in her own right. Other hugely successful players who represented England many times are Danny Denison, John C. Evans and Len Bowden. Len Bowden and John C. Evans are  still  playing members of the Club.
The Club has won the Devon County Club Championship 15 times and in 1966 completed the “triple” winning it for three successive years.

In 2003 the Club received the honour of being chosen to host the first of five test matches to be played in celebration of the English Bowling Association’s 100th Anniversary, welcoming the world’s best players from 12 countries. The day was blessed with superb weather and was watched by over 500 spectators.
↑